We must be proud to Papua - Seputar Sumsel

We must be proud to Papua 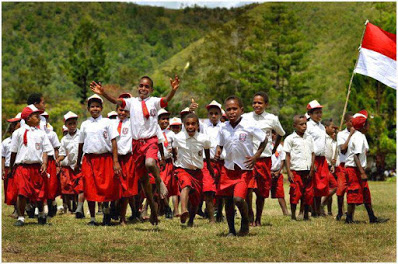 Papua is one of Indonesia's province. This province has a lot of great and talented athletes. Papua has also good view of nature and they have a lot of natural resources. Papua has contributed a lot of national hero especially who were fought during Papua's integration to Indonesia.

Last month, Papua had been succed to held National Sports Competition or PON without anything security problems and technically problems. Even though, many of anti-state present in Papua had been promete their political view and their naive opinion that PON event did not deserve to held in Papua. But, factually every Papuan have enjoy, happy and taking another benefit during PON's event.

Yesterday, President Joko Widodo had closed paraolympics games or Peparnas in Papua. In his statement, Jokowi has proud to Papua. Jokowi has appreciated the successful of PON and Peparnas's event in Papua. Papua has dominated in this sports event and the eastern provinces in Indonesia has taken place as Champions of Peparnas which had collected gold, silver and bronze medals above on others delegates.

As Jokowi's said Peparnas had educated us that whatever our hurdless and our limitation if we have spirit to fight and to try against it, we will do and reach whatever we want. So the spirit of positive compete, the spirit of  optimalization our talent and the spirit of struggle are the key of successful.

However and finally, the success of PON and Peparnas in Papua have informed to the world that Indonesia has developed and increased all of Papua"s need achievement together with other provinces. Papua's domination in Paraolympics games has shown that Papua's goverment with Jokowi's administration have seriously intention to make positive public policy which can represent equality for all of people who are live in Papua.

Jokowi's has seriously attention and intention to build Papua and West Papua in order to make two provinces have same development programs and projects as others provinces.

Because of that, there is an essential and strategic if all of Papua's people including Papua Liberation Movement (OPM) and their underbow have done togetherness with central government boosting Papua's development, because Indonesia is Papua and Papua is Indonesia. Torang bisa! Torang hebat!. Hopefully.